A Rhode Island native, Father Max Wolf is a graduate of the University of Rhode Island and Episcopal Divinity School in Cambridge, Massachusetts. He met his wife Olly - a native of Cold Spring Harbor on Long Island and truly his partner in ministry- while she was a student at Northeastern University. They have been married for thirty years and have three cats and an already locally popular Jack Russell Terrier named Meatball. 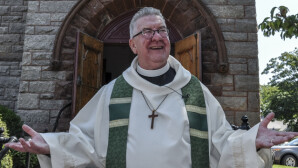 Father Max began his ministry as priest at St. Paul’s Church on June 15, 2018. He and Olly moved to Nantucket in early June after he served for seventeen years as Rector of two busy churches in lower Delaware. There, Father Max held leadership positions on several Boards including Prison Ministry (where he visited monthly), a local homeless shelter, the Standing Committee of the Diocese, and the Governor’s Interfaith Council for Faith-based Partnerships.

“The community and St. Paul’s parishioners have been so gracious and welcoming,” “Olly and I feel so blessed to be called to such a loving parish in an incredibly beautiful part of God’s Creation. We look forward to joining them in serving the island’s residents and visitors for years to come.” said Father Max.

Deacon Susan has served at St. Paul's, mostly in the summer,

since 2010, shortly after her ordination in the Diocese of Delaware. The Rev. Phillips has been a member of St. Paul's since 1976 when she and her late husband moved to the island as nurse and doctor at Nantucket Cottage Hospital for several years. They then moved to the Boston-area and later Delaware, but returned to their Nantucket home and St. Paul's each year.

Susan has two sons - one a Nantucket native who lives in California and teaches philosophy, ethics and critical thinking to people in the military. Her other son lives in Delaware and does the very best he can to live independently with the struggles of mental illness and autism. This experience caused her to start a ministry of  mental health service and advocacy in her parish, dioceses, and the wider Church.

At The Episcopal Church's General Convention in 2015, Susan led the successful effort to have Resolution C020 passed. The resolution strongly encourages all Episcopal churches and entities to support people with mental illness and their families and to provide education through the National Alliance on Mental Health and other organizations. A second resolution (C034) she wanted to establish a mental health task force at General Convention to establish a Mental Health Task Force. In July 2018, Susan is currently serving on this task force.

Curtis has lived on Nantucket full time since 1980 when he and is late wife Joan bought a small guest house as their retirement “project.” Since that time they have developed four real estate-related businesses on the Island: Nantucket Accommodations, Nantucket Vacation Rentals, Nantucket Real Estate Company (all of which have been sold), and Nantucket Island Homes, Inc., 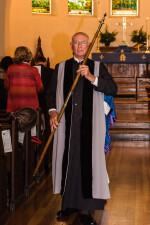 A native of Philadelphia, Curtis attended Amherst College and graduated from the University of Rochester with a Bachelor of Science in history and political science. He later earned a master’s degree in history from Elmira College. He worked from 1952 to 1962 as a reporter/photographer for the Gannett Co., in Rochester, New York. While on military leave of absence from 1956 to 1958, he served as a Counterintelligence Agent in the United States Army and was stationed at CIC Headquarters in Baltimore, Maryland. Moving into academic administration in 1962, he worked at Clarkson College, Elmira College, Syracuse University, the University of Pennsylvania, and Tufts University, serving in public relations/communications positions, and as adjunct faculty member.

As a volunteer at St Paul’s, Curtis has served as liturgical assistant to five rectors. He attended Episcopal Divinity School in Cambridge, Massachusetts, from 1988 to 1990, and is licensed by the Diocese of Massachusetts as a worship leader, eucharistic minister, and eucharistic visitor. At St. Paul’s Church, he assists the clergy and staff in coordinating the liturgical ministries of our volunteers, including ushers, lectors, chalice bearers, acolytes, and those who serve at the altar during the liturgy. He has served two full terms on the St. Paul’s Vestry and was the Nantucket Town Crier for 28 years, receiving a Governor’s Citation from Governor Deval Patrick for this service  in 2008.

as an organ major, graduating with a bachelor’s in communications and music. Upon completion of his master’s degree, also from Ball State and immediately after earning his undergraduate degree, Joe worked in the not-for-profit sector in Indianapolis. He moved to New York City during the late ‘80s, working primarily in non-profit special event fund raising.

He and his family relocated from New York City to Indianapolis in 2008, where he continued his non-profit fund raising work with a museum and an educational foundation. In 2015, he joined the staff of the Cincinnati Symphony Orchestra; he retired from full-time fund raising in 2016.

Throughout his fund raising career, Joe continued to play the organ and sing in a number of choirs, including at the Riverside Church and Church of the Holy Trinity Episcopal in New York, St. John's Episcopal Church, Forest Hills, Queens, the First Presbyterian Church as organist in Sag Harbor, New York, and as Director of Music and Organist for the First Congregational Church (UCC) in Exeter, New Hampshire. In Indianapolis, he served as Director of Music and Organist for St. Matthew’s Episcopal Church and as interim music director and organist for St. Louis de Montfort Catholic Church.

Joe comes to St. Paul’s from St. Luke’s Episcopal Church in Granville, Ohio (home of Denison University), where he has served as organist. Joe and his partner, John Howish, have two adult daughters, both of whom reside in Indianapolis. John is an RN at St. Vincent’s Hospital, Indianapolis. John and the girls look forward to visiting Nantucket frequently.

Sister Susanna joined the staff at St Paul's in September of 2016 Director of Children's Ministry. A former educator with 2

1 years in the public School system, Sister Susanna has an infectious love for the Church and the Children of our community. Love first, developed by Colette Potts is the focus for Children's Ministry this year as we commit to fostering love and kindness by growing intergenerational relationships and outreach projects that develop a commitment to caring that resonates throughout our Church and beyond.

Christine was born and raised in Meadville, Pennsylvania. She came to Nantucket with her husband, Paul, in 2000. Paul had been coming to Nantucket since he was a boy and thought of the island as home. Christine immediately fell in love with the island, and they decided to stay and raise a family here. The Bornemans started coming to St. Paul's Church in 2008. Christine began helping with St. Paul's Church School. After having her first child, Elizabeth, she ran a licensed childcare in her home for eight years. Christine and Paul were married in 2002. They have three beautiful daughters: Elizabeth  Abigail, and Katherine. All three of their girls are in school full-time, giving Christine the chance to get back to the workplace. St. Paul's Church is the perfect match for Christine and her family.