White Smoke from the Chimney

On Sunday, August 30, Co-Warden Stacey Stuart announced at both services that the Reverend John Tappan Beach had accepted the call to become the 32nd

In letter sent Friday, which was read to the congregation, John wrote “ To the good people of St. Paul's Church,

Greetings! I am humbled and honored to have been invited by your vestry to be your next rector. I write to you from Geneva, Switzerland where I have been ministering for the past ten years at Emmanuel Episcopal Church. My wife, Denise, and I are looking forward to meeting all of you this Advent.

Please pray for us as we prepare for this transition and be assured of our prayers for you as we discern the mutual ministry which we are called to exercise in Nantucket.

"We were blessed to have over thirty applicants for the position of Rector of St. Paul’s. The Search Committee evaluated all based upon their backgrounds and its collective assessment of the match, or not, of their strengths and talents with those identified in our Parish Profile as requisite for our new Rector. From the very first it was clear that John would be a leading candidate, and, based upon our Skype interviews and our interaction with John during the weekend he and his wife, Denise Beneteau were on Nantucket and the Cape (including observing John celebrate the Eucharist and preach at an Episcopal church on the Cape), it was with the greatest confidence that we recommended that the Vestry call John to be our Rector. We believe that John will become another distinguished leader of this Church that we love so dearly."

"After meeting with the Search Committee Chair and receiving the Committee’s extensive written recommendation evaluating John’s candidacy the Vestry voted unanimously to issue a “call” to John, and we are thrilled with his acceptance. The Search Committee evaluation made it clear that John best met the description of the Rector we were seeking as set out in the Parish Profile, that his references validated their judgment and that the feedback from the Search Committee and Vestry members who met John and Denise during their visit provided final confirmation of his candidacy. We look forward to welcoming John and Denise to St. Paul’s in late November."

John and Denise have lived in Geneva for the past 10 years. Their mothers live in Rhode Island and New Hampshire, respectively. They have two adult children, Jeremy and Laura, both of whom live in Toronto. John and Denise plan to be on Nantucket and in the Rectory by late November. John’s first service with us will be, appropriately, on November 29th, the first Sunday of Advent.

John was ordained in 1984 and has had extensive experience as both Rector and Chaplain. Prior to his current position as Rector of Emmanuel Church John served as Chaplain at two Universities, Trinity College in Toronto and Florida State University. John’s full biography is available under the Rector Elect tab of our website -

We want to thank our interim rector, Gale Davis, for her leadership over the past year. Co-Warden Stacey Stuart said “Gale has helped us smooth the way for the calling of John and has been a vital cog in the transition that followed Gene McDowell’s death last year. We greatly appreciate her service.”

Gale will be leaving the Island at the end of October as she and Ernie depart on a long planned trip to China. October 25th will be her last Sunday with us at St. Paul’s.

Another in our series of Parish dinners at The Ship’s Inn will be held on Thursday, September 17th. These dinners provide a wonderful opportunity for social interaction with Parish members you know or need to meet! As you know, space is limited and if you are interested in joining please contact Christine in the office. The cost for the dinner is $100 per person. 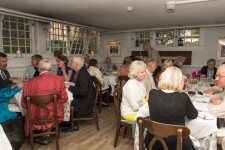 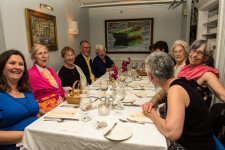 The Ship’s Inn dinners are generally great fun – scenes from the June dinner.

If you haven’t noticed, the Parish House has gained a new roof over the course of the last couple of weeks. In the last couple of years any significant storm stripped shingles from the Parish House roof depositing them in our parking lot or on Fair St. It was clear we had to take corrective action thus the badly needed new roof. The work was just completed and we again have full access to our parking lot.

In addition, the Lighthouse School has again renewed its lease for classroom space in the Parish House. As a part of that renewal, they have carpeted the large classroom in the basement and are in the process of painting both first floor bathrooms and the staircase from the basement to the first floor.   For its part St. Paul’s has tiled the heavily trafficked area inside the main entrance to the Parish House. Our Verger, Curtis Barnes, generously donated the tile. The improvements are immediately visible on entering the Parish House.

Views of the Parish House roof project from the parking lot and Fair St.

Following the Vestry retreat in June, Malcolm MacNab proposed that we develop a video to provide visitors with a guided tour of our Church. We estimate that during the summer months about 100 visitors come to St. Paul’s daily to see our Church and its wonderful windows. Malcolm’s video, to be shown on a flat screen mounted near the Narthex, will enhance their visit by providing a three to four minute narrated tour of the church. With the support of the Communications Committee and the Vestry, Malcolm is proceeding with a professional producer to develop the video. Bob Ford has written the text, Norm Berthelette has offered the necessary equipment for playback, and Karen MacNab has volunteered to read the text. The only thing lacking is full financial support.

The cost of the first video will be about $6,000, and we are hoping that a host of “Angels” will help finance this project. No donation is too small, and you can participate either by leaving a check in the offering plate or mailing a check to the Treasurer, in either case, designated for the “VIDEO PROJECT.” You may also contact Malcolm ( ) directly with any questions or suggestions. All donors will be identified at the end of the production.

As we have evaluated this project, we have realized that this could be the first of a series of videos that would be available in the Church and on our website. A second could be about the ministries of St. Paul’s with a third about our outreach. (We intend to await our new Rector’s arrival before pursuing any subsequent projects.)

We are pleased to report that Pam Goddard has assumed the responsibility of the Every Member Canvas for 2015-6. This fund raising effort is crucial to the success and viability of St. Paul’s. Pam’s letter to the Congregation will be going out shortly and will include a chance for you to tell your own St. Paul’s story on a piece of cloth that will be included in your envelope. We welcome your participation.

The Fair? – It was a Smash Hit

It’s been a while since our last newsletter, but you may have noticed that on July 15 we held our annual Fair. It was a hot day, but in spite of the weather (keeping ice in stock and making cotton candy in high humidity turned out to be our biggest challenges) it was enormously successful. After the Every Member Canvas, the Fair is our largest single source of revenue. This year we matched last year’s record $40,000 net revenue figure. The Fair could not have been the success it was without the tireless leadership of Penny Macintyre and Sharon Robinson who toiled before and after the Fair to organize and execute. It also would not have been possible without the army of volunteers (Penny reports that there were more than 170 this year). Planning is underway for next year’s event, and it is not too early to start thinking about volunteering or donating to the Fair. 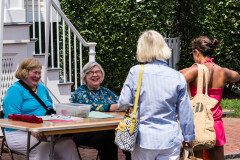 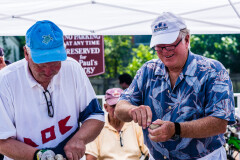 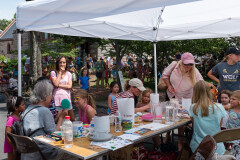 The quahogs were great, everyone had a smile, and we look forward to next year.

Help us Update our Database

We are in the process of updating our database of addresses and e-mails. If you’ve moved or changed your e-mail address could you please send an update to the Parish Office? If you are not receiving e-mails from us, it most likely means we do not have your e-mail address – we’d love to have it. In either case you can either call Christine at 508-228-0916 or send an e-mail to . We’d greatly appreciate your help.

At the mid-summer All Parish Meeting, you were apprised of St. Paul’s predicament with the Massachusetts Architectural Access Board (AAB). On July 28th, 2015 the AAB denied our request that it determine that its “30% Rule” - the application of which would require that the entire church building become handicapped accessible – was inapplicable to our church building. We have hired a new consultant for the purpose of seeking variances that would achieve the same result.

Fortunately we can continue to use Gardner Hall since on August 24, the AAB granted our request to extend our temporary certificate of occupancy for the Daume Entrance from September 1 to January 1, 2016 and our deadline to seek variances from August 27 to October 1.

On August 27, our consultant and a parishioner met with the Executive Director of the AAB who was visiting Nantucket and led him on a tour the church building, including Gardner Hall. The purpose of the visit was to establish our grounds for seeking variances and to assess preliminarily the odds of our receiving them.

Also on August 27, St. Paul’s formally requested an “adjudicatory hearing” before the AAB. Our counsel advises that such request preserves our rights not only to the hearing but to appeal to the courts the AAB’s application of the 30% Rule and its jurisdiction over the interior of the church building (The hearing and a subsequent appeal would be pursued if the results of our efforts to obtain variances are unsatisfactory.).