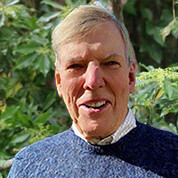 Jan is a lifelong educator who has been a summer resident on Nantucket since 1973. He attended Kent School and Stanford University, and his wonderful experience at boarding school led him to become a teacher and school administrator. He has taught at three schools, and for 27 years he was Head of Middle School at St. Louis Country Day School. Jan moved to St. Louis in 1982 where he met his wife Ginger Newton shortly after arriving. They were married in 1986 and have three children.

Jan has served on the vestry at The Church of St. Michael and St. George in Clayton for ten of the last eleven years. He teaches at the St. Michael School, the church’s elementary school. Jan developed an interest in Abraham Lincoln when he moved to St. Louis, and in 2018, he published a young adult novel, Young Lincoln, which won a Best of Illinois History Award and a Nautilus Award. Jan and Ginger spend the summers in their house on the Wauwinet/Pocomo border. They love attending St. Paul’s in the summer and faithfully sit in the pew next to the picture of Fred Rogers. They love the warm and welcoming atmosphere at St. Paul’s. Jan and Ginger are members of Sankaty Head Golf Club and the Nantucket Yacht Club.