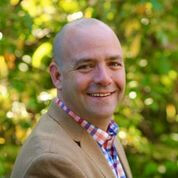 Kirk Baker “retired” from his career in the wine industry in Florida to move to Nantucket in 2012 with his now wife Jenny Benzie.  Together, they founded and have successfully operated Épernay Wine & Spirits, a boutique wine store in the Brant Point neighborhood.

Kirk was raised in and attended the Episcopal Church in spite of many the many family moves caused by his father’s career with Maytag.  He attended DeSmet Jesuit High School in St. Louis, MO, Central College in Pella, IA, and Drake University in Des Moines, IA.  He started his career traveling the world while working for Holland America Cruise Line as an Assistant Cruise Director.  He then moved to Florida to follow his passion for the hospitality business.  There he worked as a Wine Sales Consultant with the Fine Wine Division of Southern Wine & Spirits, and became the Florida Regional Manager of Fine Wines with the wine importer Frederick Wildman & Sons.

Since moving to Nantucket, Kirk has been seeking to become more involved in this community and became an active member of St. Paul’s in 2019.  As time allows, Kirk enjoys time with his wife and dog Cooper, along with playing golf and fishing Nantucket waters.  He and Jenny enjoy down time and traveling in the off-season.